Cradle of Filth – Godspeed on the Devil’s Thunder (Roadrunner Records) 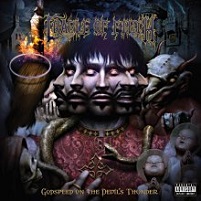 It’s somewhat remarkable how Dani Filth has kept this training rolling amidst constant lineup changes and focus shifts. Seriously, the band has yet to have the same lineup from album to album, but here they are, still hard-charging, a tad overblown, but still engaging those on the fringe of black metal and Goth. The follow up to 2006’s relatively tepid Thornography, Godspeed on the Devil’s Thunder is as close to a return to form for COF as we’re going to get in relation to the band’s early seminal albums.

The Gilles de Rais concept is a good one, providing Filth with more avenues to weave his gifted poetry into a storyline. One glance at the lyric sheet reveals the dwarfish singer is still one of metal’s finest wordsmiths, a fact few can deny regardless of one’s opinion of CoF. And the sordid story of the noted Frenchman seems to have given the band some fodder to re-introduce some long-gone guitar harmonies back into their sound, as is in “The Death of Love” and “Tragic Kingdom.”

“The 13th Caesar” ranks as an album highlight, complete with an eerie, yet charming chorus and some tight guitar work from Paul Allendar. New drummer Martin Skaroupka turns on the jets during “Honey and Sulphur,” a song that is indicative of CoF’s post Midian direction of simple, yet brazen guitar riffing while “Midnight Shadows Crawl To Darken Counsel With Life” is one of the more towering tracks to come out of the band in recent memory.

CoF’s cinematic and conceptual approach tends to commercially blow up in its face sometimes (see: the overlooked Damnation And A Day), but when it pins a good story down like Gilles de Rais and is cognizant of what there is to work with, the results are usually strong.

Godspeed on the Devil’s Thunder finds Cradle of Filth still adding on to its core structure and to take a left turn at this point might not be a wise career move. We all know how many are split on the band, but such is life for a band that was polarizing from the onset. Once past the band’s glitzy appearance, found is a heady, savvy, delightfully creative band hell-bent on outrunning the Norwegian scene that so disregarded them a decade ago. Several laps into this marathon, it appears Cradle is up by more than a few paces…