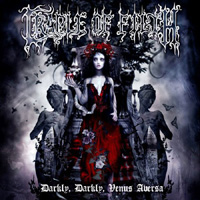 There’s little debate over how increasingly extreme Cradle of Filth has become over the years, and it’s not a reach to say they’re heavier than their more black-like contemporaries (and rivals) Dimmu Borgir, Immortal, etc. However, that doesn’t translate to them being better, something that’s readily apparent on Darkly, Darkly Venus Aversa.

Like its predecessors Thornography and Godspeed On the Devil’s Thunder (which had its redeeming moments), Darkly… runs into a haze of samey, unmemorable songs, all for the sake of extremity. Yeah, there’s lots of aggro riffs being tossed about by guitarist Paul Allender, yet they don’t stick. In fact, a lot of these songs don’t stick, save for various moments when the band decides to glide back into their much-missed Gothic era, like on “The Persecution Song” and lead single “Forgive Me Father (I Have Sinned),” which is probably the best song here only because it has melody and depth to it.

Dani Filth is all over this thing, like usual, and it’s a marvel the pint-sized singer has yet to run out of words. Problem is, he’s going up against some very brutal material, especially “Lilith Immaculate” and “War,” both of which are long, and multi-faceted workouts that fall somewhere between the black and death metal realms. Point is, without the melodic capacity the band so relied upon in the late 90s, Filth’s (the singer, that is) doesn’t have quite the same poetic impact as he did when the band was such a near-revelation over ten years ago.

Perhaps this is merely a matter of preference, but the more extreme and full-bodied Cradle of Filth isn’t nearly the enticing prospect as when the band was flaunting its Goth/Vampire angle. That being said, Cradle has become the band that many didn’t see coming back in the Cruelty and the Beast/Midian days, which is for what it’s worth, is neither a good nor bad thing. If Dani and the boys ever decided to get tangled back into melody and combine it with this extreme bent, then look out.