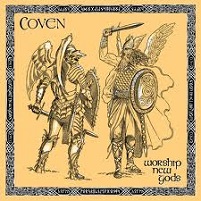 In 1987, thrash metal was the music of choice for those who worshipped the frantic rush of sounds set to a leather studded fist. A whole a slew of new metal gods were thriving for metallic supremacy, proclaiming this year to be the highpoint of the genre. Amid all this chaos and destruction, there was another musical

entity on the rise and their sound of heavy/doom metal was raised under the banner of a band called Coven.

Coven, hailing from Detroit, MI self-released Worship New Gods on vinyl only and over the years it has been considered a rare metal album. Many of the songs on the recording dripped a level of moodiness that rivaled such bands

as Black Sabbath, Candlemass and Mercyful Fate. They continued to carve out a legacy that spiraled into their 1991 demo Ragnarok before splitting up a year later.

In 2011, Coven surprisingly reformed with all the original members intact and began performing sporadic live dates. With this new plan of attack in place, Shadow Kingdom Records has reissued Worship New Gods for the very first time on CD with a splendid sleeve design

and a lot of excellent band photos to augment the glorious return of the band. In many ways this reissue will help to re-establish the band to all its longtime fans, and hopefully restore the glory that once was.

stands up all these years later. After giving this disc a spin (several in fact) I have come to appreciate the antiquity conjured forth in this seminal release. Doomy Sabbath-like grooves can be found on the opener “Riddle of Steel” and this is wavered throughout with sword and sorcery laden lyrics patterned into phantasmagoric imagery that brings to mind bands like Cirith Ungol and Manilla Road.

At times Worship New Gods might come across a bit dated, and 25 years is long time to process Coven’s return to the circuit. Clearly though, hardcore enthusiasts will enjoy the miasma of doom-centric sounds and images that is closely associated with the genre. I would hope this reissue leads to bigger and better things on the road ahead leading to Valhala though.