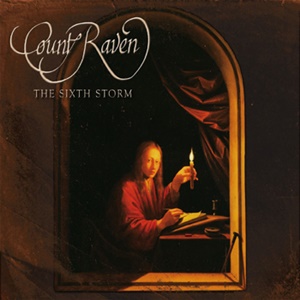 Subscribing to a quality versus quantity platform when it comes to releases, Count Raven arrives at their sixth studio record for The Sixth Storm. Hibernating for twelve years since the last release Mammons War, the Swedish doom metal act gained a new bassist in Samuel Cornelsen to join drummer Jens Bock and long running vocalist/guitarist/keyboardist Dan ‘Fodde’ Fondelius. Content to churn out a classic style of doom that features epic song structures and a steady supply of slow riff/groove combinations, the continual appreciation of Ozzy-era Black Sabbath from the 70’s along with Pentagram and Candlemass circulate throughout these nine tracks that span almost seventy-four minutes of playback time.

As far as registers go vocally, Dan certainly has that lower Ozzy-like warble and charm down pat right out of the gate for the relatively energetic opener “Blood Pope” – his guitar movements crisp and sharp, the transitions giving off a cleaner, atmospheric spirit to match the gloom with moments of uplifting charisma when called for. That Iommi-infused chug matches the vocal lines predictably on the follow-up “The Curse”, while the majestic evil tones of old Candlemass come to the forefront for “The Ending”, keyboard embellishment adding more of a haunting vibe to specific verses. Patience is a virtue in the doom genre – instrumental sections become a tad longer, transitions equally subtle as these musicians lock onto specific chord combinations and drive them into the depths of the Earth to squeeze out that sadness, desperation, or unfathomable anguish. The two longest cuts “The Nephilims” and “Oden” both clock in between ten to almost twelve minutes a piece – the latter featuring a nice up-tempo switch midway through that allows Jens and Samuel a sense of groovy interplay and playful essence to keep the movement peppy and alleviate any chance of boredom.

Ending the record on a somber piano/keyboard ballad for “Goodbye”, The Sixth Storm displays Count Raven in their classic doom metal comfort zone. Content to not reinvent the wheel, time will tell if this record can stand up to the early 90’s pinnacle efforts like Storm Warning or Destruction of the Void – but there will be plenty who delight in the return of this trio in record form.