Corrosion of Conformity – Eye For An Eye Reissue (Candlelight Records) 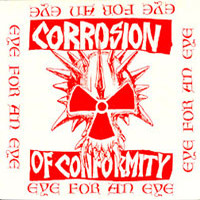 A near-banner year for COC, thanks in large part to their self-titled comeback album that hit in the first quarter of 2012. It did a lot in terms of erasing the bad taste in a lot of people’s mouths after America’s Volume Dealer and the subsequent sputtering out that took place on 2005’s In the Arms of God. While fears that the band will head back to back porch dumb metal territory may not be fully allayed (Pepper Keenan may eventually return, after all), their punk/hardcore era has come full circle via both the self-titled album, and now the reissue of their seminal Eye For An Eye debut from 1984.

Candlelight didn’t cut very many corners when it came to this reissue, providing extensive liner notes, a photo collage, along with the addition of the long out-of-print Six Songs with Mike Singing EP, which was originally released in 1989. This was a precarious time for COC, as crossover

lost major ground to thrash, while lineup issues forced founding member/bass player/vocalist Mike Dean to leave right after its release. From that point on, COC’s crossover era was a forgotten entity until this year. So again, big ups to the powers that be for getting this stuff back out there…it has withstood the test of time.

In light of the above remark, Eye For An Eye is incredibly sloppy, especially by today’s standards. Woody Weatherman’s guitar

falls in and out of tune, with loose notes all over the place, often supplemented by brief spurts of feedback. Behind him, drummer Reed Mullin is able to compensate, usually tossing in a wayward fill to keep things together. As much as this resembles a sonic free-for-all, the spunk of songs like “Tell Me” and “College Town” has a type of unawareness and brash extremity that’s easy to latch onto. It’s also pretty cool to hear the post-song outtakes, like one of the band members asking, “Is this for real?”

It would be a crying shame if COC’s legacy revolved around their ill-fated chasing of the Metallica grail. The albums before America’s Volume Dealer are some of the best the 90’s produced, specifically coming from an American metal band. Going a little backward, Eye For An Eye is the starting point, a jarring dose or Red Bull-‘d punk metal, that in 1984, was as extreme as one could get.