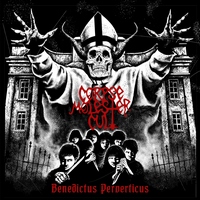 Finnish death metal band Corpse Molester Cult are an intriguing band. They feature in their ranks, none other than Tomi Joutsen (he of the insanely consistent Amorphis), but don’t look for a vocal performance from him – he’s one of the guitarists, though he does contribute some backing vocal growls. But perhaps this is their strongest move, as they can sneak through the ranks without all of the “featuring Tomi Joutsen of Amorphis” tags. Regardless, Corpse Molester Cult stands on their own two feet with Benedictus Perverticus.

It’s hard to get a foothold in this age of Swedish death metal clones. Somehow Corpse Molester Cult has found it though, even those they do admittedly owe Entombed/Dismember quite a bit in their inspiration. The guitar tone has that low rumble and buzzsaw crunch, offering that infamously dirty approach. But the band takes it in stride, and comes up with plenty of killer riffs to make up for it. Veering it into a more death ‘n roll direction, each track is chockfull of riffs sure to get your head moving. “Raped by Seven Zombies” has that mid-tempo swagger in full-effect (the speed this always works the best at) and “This is Where it Ends” elevates the infectious riffs up to quicker tempos while keeping the ‘fun’ of the groove intact. Even vocalist Antti Åström, who is working within the Entombed/Gorefest framework, sounds convincing and fits the sound to a tee with his upfront shouts and roars.

Hard to complain about much of anything here besides the short length of this 4-song EP. Hopefully this is a taste of some coming material, as the old school death metal vibe is surprisingly strong with this one. Sure, it’s nothing out of the box, but the riffs beg your involvement and offer up a surprisingly enjoyable listen. Corpse Molester Cult could be onto big things with a killer full-length debut.