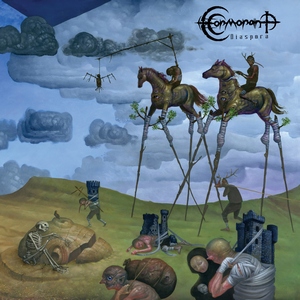 Ever the ambitious group, Cormorant have been slugging it out for quite some time. In fact, Diaspora marks the fourth full-length album from the band, and the only sign they continue to exhibit is that of being willing to grow and expand. While their approach may be in fact reminiscent of tossing in the entire kitchen sink, they continue to do so ever more gracefully and tactfully.

The formatting of the act hasn’t changed, and that’s okay given the very broad strokes that the band paints with. Elements of everything from black and death metal to doom, psychedelia, and progressive still drives the band forward. What seems to be (always) changing is the band’s approach to songwriting. This time around, there’s a mere four tracks representing Diaspora, but they add up to over an hour’s worth of music. The final track, “Migration,” stands tall at over 26-minutes in length and feels almost like a full-album in and of itself. But it works – the combination and culmination of the band’s work and effort in genre-blurring. It’s a lengthy track, but due to the extraordinarily varied approach (that still manages to sound like “a song” no less) wielding both clean and harsh vocals, emotional and gloomy riffing, ‘70s-inspired tones, folky acoustic moments, and a glimmer of extremity, it comes off as reason enough to check out the album. The remaining three tracks come off as equally strong and varied, resulting in an hour-long album that will end before you know it.

Cormorant continue to put their best foot forward with Diaspora. An engrossing, adventurous, and rather ambitious release that progressive fans will no doubt eat up. Don’t be daunted by the length or amount of influences the band can pack into their persona, instead embrace it and just enjoy the ride.