Convictors – Envoys of Extinction (Self Released) 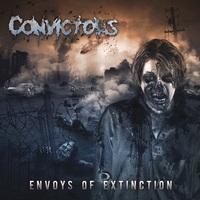 Swedish death metal by way of Germany; sound familiar? It probably won’t be the only familiarity that one faces when hearing Envoys of Extinction for the first time. The intriguing fact here is that Convictors actually started out way back in 1986! Granted, they wrote up a demo and called it quits until about 2008, but we are talking about a debut that’s almost 29 years in the making.

Sadly, there’s not much here to really elaborate on other than the sheer time lapse. In the almost thirty years since the band was first conceived, everyone and their brother has jumped in and gotten a piece of the Entombed/Dismember throne. Granted, there’s also a bit of noticeable God Dethroned here as well, but nothing that really stands outside the very well defined box. There are some pleasing melodies here and there (“Diabolical Female”), as well as some groove (“Fragments”) at will incite some toe-tapping but nothing has a tendency to stick past the runtime. The burly guitar tone provides plenty of punishment (“Festering Infestation Strikes”), so it’s notable that Convictors kept up with the times instead of going “full retro,” as it does make a difference in the sonic assault. The vocals are the standard fare here, mostly sticking to menacing roars but a few pig squeals tend to pop up (again, a sign that the band has kept up with the times).

Death metal through and through, there’s ultimately nothing that establishes Convictors as their own entity. Despite some efforts to make sure that the band has avoided being branded into the carbon-copy old-school category, it’s hard to give this one the full thumbs up. Merely passable.