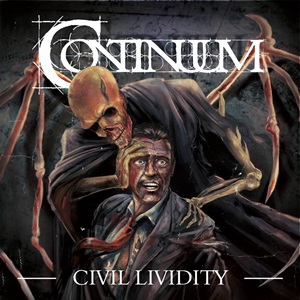 Watching an act rise from self-financed, unsigned infancy to stand shoulder to shoulder with national/international output that has reputable label support behind itself has been a much more common occurrence in the global internet age. Another burgeoning independent hailing from this scribe’s part of southwestern CT, Continuum is a five-piece outfit that take a progressive, groove-oriented metal foundation and spread their wings through a plethora of thrash, death and melodic influences – building upon their previous work (a full-length Rise and Fall in 2012, plus an EP follow up Seven two years later) and ready to conquer the masses through this five song EP Civil Lividity.

Anger, sorrow, and frustration fuel the Continuum output. Riffs that snap and crackle bones from limbs, a rhythm section that can play deep in the pocket for many measures, then push the accelerator to the floor for extreme sonic propulsion the next, plus a multi-sensory vocal experience from Brenda St. Amant to captivate. When Bryan Reilly and Jason Niezgorski dish out those twin rhythms for “Dogs of War” at thrash and semi-power groove paces, there’s a sense of Swedish-oriented finesse against the American intricacies that keep ears pinned and heads spinning for the next aural salvo- while thoughtful, classical strains come through in the cleaner sections of the title track follow up, the double bass, tribal sections positively hypnotizing. Comparisons can range from Dead Heart-era Nevermore to Angela Gossow-period Arch Enemy, but there are again those thrash sides and ethereal, clean sections for Brenda that diversify Continuum’s approach – most evident on “Faith Absolves”, where Brenda seems to be channeling long lost Type O Negative’s Pete Steele in her lower, chilling delivery. The dual growling/screaming nature counterbalances her premiere clear melodies – giving the band ample creative opportunities to open the sonic landscape with the songwriting.

All five tracks engage the ideal hook, versatility, and heaviness quotients to gain broad appeal through the underground – plus ramping up shred proceedings during the extended lead break for “Origins of Hate”. The thought provoking lyrical content regarding the media, government officials and social decay should stir up audiences and possibly get some call to action going – kudos to Continuum for matching the energy musically with killer topics. Sonically possessing a top notch final product- with mixing and mastering duties handled by Nicholas T. Rage of Toxic Holocaust and Zeuss respectively – Civil Lividity is one of those EP’s that should be talked about fervently in New England metal circles and beyond. Crushing progressive groove-oriented metal for the win. 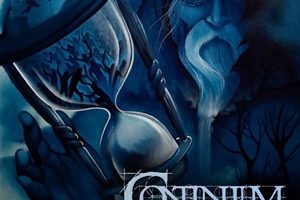