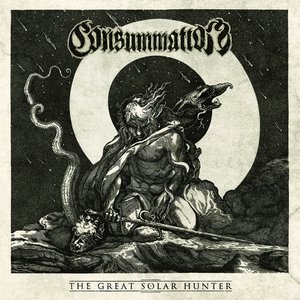 “Deep I each man is the knowledge that something knows of his existence. Something that cannot be fled nor hid from.”

Daunting words and the core concept (whether intended or not) at the heart of The Great Solar Hunter, the debut from Australia’s Consummation. The figurative hunter, a being expressed through similar motifs in The Wild Hunt (in the northern reaches) or The Four Horsemen for those inclined toward Armageddon. A divine force arising from more mythic times, riding in from places unreachable to bring obliteration, all human concerns and sensitivities left by the wayside.

And what a force it is. Nothing particularly new here, Consummation peddles a black/death hybrid fully enriched by cavernous fires, not unlike label-mates Abyssal, Mitochondrion, or Finnish natives Desolate Shrine. The Great Solar Hunter contains five ‘songs’, each lengthy (7-14 minute) sprawling and organic creations, often surprisingly nimble despite their oft substantial girth. Indeed, at 50 minutes the album is almost a swift listen. The atmosphere presented is a bleak, suffocating grind, a pulsing machinery that gives no particular respite, at least until it ends.

The strongest tracks on offer are the two longest, title track “The Great Solar Hunter” and closer “The Eminent Fires of Sacrifice”, and for the same reasons. Straightforward (if dense) blackened death passages churn and roil against themselves, and through successively building parts a narrative-within-the-narrative is employed as outright crescendos are built toward (and that’s firmly with zero nods to the post take on the concept). The sound of visceral, tangible resignation comes forth in these moments, explored vividly through the stellar lead guitar work of John Gossard (of Weakling fame, among others). Like uncontrollable hands of fire spiraling out across the tempestuous murk, these moments can be strangely beautiful, likely in no small part due to how oppressive the surroundings are.

And oppressive it is, there being no real grace time or meandering asides across The Great Solar Hunter. If you’re familiar with the general disposition of the cavernous/abyssal (with all its esoteric leanings) sound, you won’t find any surprises here but you will find exceptional execution that really delivers when it needs to. If you’re new, then you have enough knowledge in hand to know that run as you will, it will do you no good.