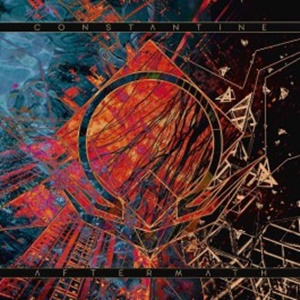 Once you establish yourself as a proven entity in heavy metal, opportunities arise if you network properly. Case in point – Greek guitarist Constantine, best known in circles for his previous work in Mystic Prophecy, Nightrage, and live player for Primal Fear. Aftermath is his second solo outing – an eight-song affair that throws an array of melodic, power, and shred-type metal arrangements with outstanding support from some of the best singers in the business. It’s evident that Constantine pushed the parameters of his influences to create a diverse selection of material that is relevant and modern while musically engaging and exciting.

Worry tends to set in that as a guitarist Constantine would set up the songs to be secondary to fiery shred lead breaks and pushing his axe expertise to the masses – and that couldn’t be further from the truth. “Holding On ‘til the End” for instance features Wearing Scars’ Chris Clancy, the main circular guitar hook and subsequent modern rock chorus ready made for adventurous rock radio airplay – while the follow-up “Deliver Us” featuring ex-Firewind singer Apollo Papathanasio pushes speedy power riffs, dramatic keyboard orchestration flourishes and the man’s undeniable bluesy vocal resonance. There are plenty of spots for Constantine to stick with the themes on hand, plus add his arpeggio-oriented technique and fleet of finger activities to the mix – opening instrumental “Bushido” a clinic on everything from Gus G to Joe Satriani as far as layering and pace, while “Elegy” featuring Bill Manthos has a bit of an alternative/darker nature, an EDM/cyber pulsation for the keyboards as well. The two biggest names making their presence felt are Speed Strid (Soilwork) and Ralf Scheepers (Primal Fear) on “Hellfire Club” and “Press on Regardless” respectively. Speed transitions between his patented growls and AOR-clean voice, combining them on the chorus for chilling effect, while Ralf provides his multi-octave Halford-esque essence to a mid-tempo song that traverses a quieter refrain and magical keyboard/guitar interplay. And you can’t go wrong with Schmier on “War and Pain”, a bonus track that has more of a thrash feel than anything else on Aftermath.

Capturing various styles in a tight 34-minute window, Constantine delivers a crunchy, melodic metal effort that will get plenty of promotion not only from the marquee vocalists, but the professional execution of the songwriting on hand.

Constantine – Humility in the Aftermath