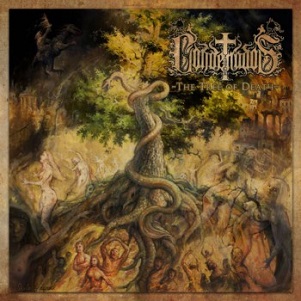 The monk-robed one, otherwise known as former Candlemass singer Messiah Marcolin, doesn’t get enough credit for bringing in over-the-top, theatrical singing into doom metal. In his heyday, Marcolin made even the most simple of Leif Edling’s lyrics into dramatic salvos, as if he were center stage at the Royal Swedish Opera. Of course, Marcolin’s warbles and theatrical flair could be occasionally tiresome, but he did open the door for singers of a similar thought process, like Fernando Vidal of Chilean doom-mongers Condenados. On the band’s second full-length The Tree of Death, Vidal brings the appropriate arsenal of vocal heaves, but, it’s not without flaw.

Sure, Vidal has his share of bumps in the technical department. He sometimes holds notes for too long or rushes his parts, but give him a bruising canvas like on “Demon’s Head” and he’s authoritative without sounding hokey. Then again, he’s exactly that on “Burn” and “Sea of Fire,” the latter containing an awkward, almost forced chorus. Vidal also doubles as the band’s sole guitarist, where he fares much better in the riff arena. While his choices rarely veer from the traditional stout-doom template, he does unearth a few worthy rounds, like on opener “Star of Punishment” and the aforementioned “Demon’s Head.”

“Acquired taste doom” might be the way to go with Condenados, who are going to live and die with Vidal’s vocals. The Tree of Death is a mild, come-and-go doom outing, but Vidal should take solace in this: Ozzy was never the most technically-inclined singer and look where it got him. Always a silver lining.