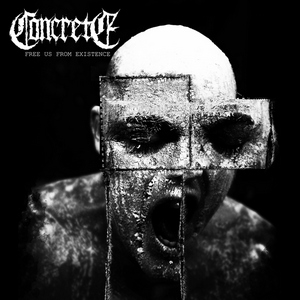 There’s nothing quite like that upstate NY approach to hardcore. It ends up more of a hybrid between hardcore, death metal, and beyond instead of simply following the usual methods. Albany-based act Concrete has clearly been privy to a number of acts in the area that have championed that particular sound, given the vibes of Free Us from Existence. An album that feels quite pissed in its hardcore state of mind, but doesn’t hold back from occasionally flexing some more extreme metal muscle.

As soon as “Executing Vengeance” starts things off, it’s very clear that Concrete are quite angry. Some furious blasts erupt as barked, hardcore vocals snarl and the band lowers their speed into vicious grooves and punishing chugs. The type of track meant to really get pits up and moving. But they also lace it with some eerie melodies to keep it fresh and interesting in its latter half. For that matter, “Path of Fire” takes with it some thrashing tempos and death/black riffing patterns alongside some raging hardcore fury to make for interesting bedfellows. With a runtime just shy of 30-minutes, the band has to hold nothing back in terms of unleashing their chaos, and the energy on even later tracks like “World Tomb” remains quite palpable in tone. The mix of extreme genres into the hardcore backbone makes for some intriguing dynamics, and the album never stops coming at you with full speed and aggression.

Free Us from Existence stays fresh and vicious from beginning to end. The total slurry of extreme metal influences and the upfront hardcore aggression makes for material that can continuously attack without it becoming too one-dimensional or tedious. Concrete knows how to hit hard, and those looking for a musical walloping are going to really dig this one.