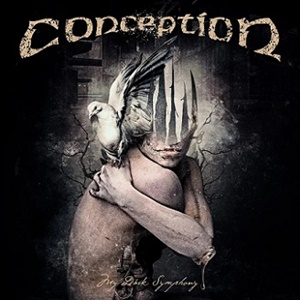 Back after a significant hiatus (although reuniting in 2005 for festival shows in the USA and Norway), the stature of Conception has only grown in those layoff years. Roy Khan of course going on to sing for Kamelot, while guitarist Tore Østby developed Ark. Finally setting their sights in the studio for a proper ‘reunion’ of the 90’s lineup, we have My Dark Symphony – a six-track EP that feels like no time has passed in the catalog of the quartet, picking up where they left off exploring varied modern terrain while never forgetting their progressive/power metal platform that launched the band in the first place.

The band has always excelled at balancing out the unique intricacies as far as progressive passages with a melodic underpinning, ensuring that the songs always have a consistent hook of some sort on both the vocal and musical fronts. Even when going for more of a semi-tribal/ exotic edge to “Quite Alright”, the smooth Khan melodies soothe the savage beast – ascending and falling into this comforting chorus that could transform dreams into reality. The jazzy piano next to a slower building drum passages takes “The Moment” into resplendent glory, channeling some symphonic and U2-like atmosphere into this spiraling arrangement where Tore drives the ship into electric bombast before taking a nosedive into calmer, serene picking. The brief 68 second “re:conception” instrumental contains a cinematic scope to set the mood before the booming drums and subsequent shape-shifting ‘Grand Again” sets ears on instant alert – Roy pulsating against the music with a semi-cyber, dramatic vocal delivery that shows why is truly in an elite class of singers for melodic, power/progressive metal.

By the time the Deep Purple-esque guitar strains and accompanying female vocal support for the title track conclude the recording, you get the wish that this was once again a full-length and not just an EP. Will this continue to be an active entity, or sporadic? Time will tell – be thankful for new music from this veteran group, as they continue to be at a peak creative place through this effort.