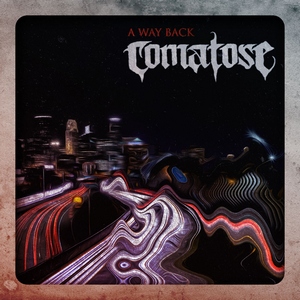 A group comprised of members of Amiensus, Chrome Waves, and Fail to Decay tackling dreary atmospheric rock/shozegaze with some ‘90s grunge influences to boot, A Way Back is a bit of a different album from a sonic perspective. But it’s never lacking for some emotional resonance, and the way that it balances an older sound with some more modern trimmings is admirable stuff indeed.

If one could imagine the sounds of ‘90s grunge being coated with a shoegaze-y tone instead of an angst-y and angry one, you might get a solid first impression of what to expect with A Way Back. The guitar riffs have a nice layer of fuzz to them, but not in that stoner doom way that you might first thing of with the description. Instead, it’s a gloomy vibe – there’s a pleasing heavy weight to it even if it doesn’t really get aggressive (though some rhythms like in “Further” do pick up the tempo a bit). But the buzzing tone and longing melodies make an intriguing combination, and one that perfectly matches James Benson’s subdued clean vocal performance. As the opener, “Circles” gives you a good impression of what’s to come. The aforementioned guitar tone and lush melodies welcome you in, but it’s really the next track, “Gone,” that brings you fully back into the ‘90s with its arrangements and vocal lines. The best part though, is that despite being a bit retro in sound (to an era much of the metal community tends to ignore), is that it doesn’t feel like a simple throwback. The atmospheric rock and shoegaze aspects make it feel more modern, leaning towards that post- sound, it doesn’t stay just a nostalgia trip. Later track “Inside” even augments things with some extra heaviness and some more aggressive vocals in spots, and it’s a great combination of influences that really allows it to shine.

Hazy and retro in sound, but keen to still set itself apart from the pack, Comatose delivers a trip back to the ‘90s without dating themselves. Just the right amount of heavy riffs and trippy melodies to cast a wide net of appeal, A Way Back is perfect for an afternoon where you want to sit back with something that is less aggressive but carries a weight and depth to it.