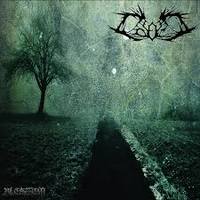 Daniel Neagoe, vocalist of the much-loved doom/death outfit Eye of Solitude, strikes out on his own as a one-man depressive/atmospheric black metal project called Colosus. Here naming himself Khrudd, he shows off some nifty drumming ability, able musicianship, and has crafted an album that, while not a must-hear to those on the fence of the genre, is a worthy addition to the British black metal scene.

Setting things up with a track of instrumental, cold, church organ, Khrudd paints a lonely portrait with “Desertaciune”, a nice prelude to desolation. On “Mormant”, full-on blasts ensue and bring the full gravity of the sound herein, by track two. This is atmospheric black metal of a European feel, somewhere in the Coldworld-meets-Walknut vein. Tempos vary from the blizzard-of-torment barrage of speedy heft to a dirge-and-despair crawling pace…all said, it averages out to a middle-paced affair with lots of large, booming, blasting, and well-performed drum work.

Riff-wise, Colosus keeps things relatively understated and efficient. Plenty of chorded dissonance strummed in black metal stylings can give an almost Winterfylleth remembrance, but let’s not go too far down that path. Here, the guitars seem to prefer to ride comfortably in the back, behind the drums and vocal torment, which is airy and awash with reverb (and discontent), hovering in the front, yet also, above it all. Relatively simplistic of riff, this is melodic music to be sure, haunting and melancholic notes stretched over the hellfire contained in drum and voice.

Speaking of Coldworld, here Colosus, on track seven, covers “Red Snow” and does quite a bang-up job of it, certainly one of the album highlights. This solidifies the Coldworld-worship that’s apparent here, first suggested by the similarity between the album artwork and the aforementioned’s opus, Melancholie.

Blestem is an impressive debut album. While it feels like it falls a little short of reaching its potential, (it’s an album that you want to sink its hooks in you, but leaves only cuts) it remains a good, dark journey, at just over an hour’s runtime.