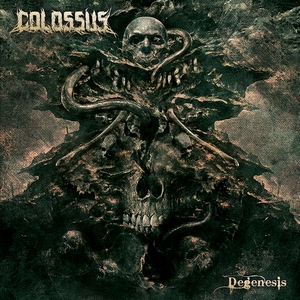 There’s something to be said for brutal death metal bands that know exactly how to trim the fat to deliver a pulverizingly lean attack. Colossus manages to do this on their first go-round with Degenesis, though admittedly it’s not their first walk in the park, as they contain members from Lividity, Cryptic Fog, and Cereviscera. That said, this debut should make extreme metal fans collective ears perk up.

Colossus bring forth a level of brutality that knows exactly how to take your breath away. Its something that they do without fail for the first six of the seven tracks here. Opener “Becoming All Forms” jumps right into scorching brutality after a few moments of atmosphere and the party doesn’t relent in any way after. Towering, Deeds of Flesh-esque riffage and a technical lean on the guitarwork only helps to make the music more memorable despite the onslaught of heaviness, and the varied tempos, such as a later slowdown in the track, keep the band from becoming too one note and mindless in their violence. This method is rather textbook, but Colossus demonstrates a great understanding of how and why it works – cutting right to the good riffs and simply stringing them together for entire tracks. “Iniquitous Macrocosm” has everything from spiraling melodies and pounding drums to playful bass rhythms and snarling vocals. The tech aspects never go too far into the front and center, with a ‘smash and grab’ feeling being more dominant with the band’s approach – one that provides plenty of thrills. It’s only at the closing title track that the band eases off the brutality a bit, going for more of a foreboding and methodical opening until more visceral energy begins, though with a more playful sense of melody. It’s slightly different but it works well for the final track, providing excellent instrumentation and a nice palette cleanser so that you can jump back in and listen again.

Colossus starts off their musical endeavors with an explosive bang on Degenesis. It carries the brutal death metal flag high, while weaving in some technical musicianship underneath to keep it fresh – not to mention a wise choice in keeping the length of things at a spry 25-minutes to allow for maximum destruction.