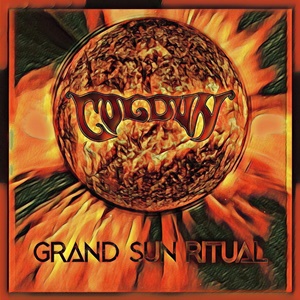 Initiating in 2006 as a solo project, Coldun has grown into a full group with long-time musicians who are top-notch in their field. Releasing two previous full-lengths with 2007’s Necessariis? Dubiis? Caritas? as well as 2014’s Collapsing Polarities, the third effort Grand Sun Ritual is another mind-expansive outing into the world of doom and post-metal. Unafraid to inject everything from saxophone to Hammond organ elements to execute every facet of these ideas beyond conventional electric instrumentation, these epic songs reach out to the inner turmoil and struggles we often face to give us hope and strength in a way rarely channeled from most bands today.

Lyrically Coldun tackles the meaning of life and death in a positive light – nothing being absolute when it comes to death, developing new ideas as a result of journeys in the world that have a spiritual nature revealing that death indeed may not be the end of life as we know it. A mixture of conventional clean singing with a baritone/tenor feel against some darker, gothic tinges as well as music that can go from post-metal to doom to extreme action, then turn on a 70’s blues rock dime gives you some idea of the variety and diversity you’ll hear from “Down Below”, while the acoustic/piano strains throughout “Stories Untold” create this kaleidoscope of calm ambiance – the distance for Coldun’s melodies during the latter channeling a bit of Crash Test Dummies in the lower register. It’s so difficult to pinpoint specific influences – aspects of Moonspell, Candlemass, Opeth, The Gathering, Sisters of Mercy come to the forefront when listening to specific riffs or sequences/transitions during highlights like “Hail Out to Thebes” and the exotic title track (featuring Middle Eastern/saxophone supplementation). The seven songs average out at a bit over seven-minutes and change, allowing the listener to deeply engage into the layers of ideas propelled, driven outward and inward for maximum heightened sensory exposure when going from softness to heaviness, as well as the grey areas in between.

Although the releases take significantly long to hit the streets, Coldun subscribes to a high-quality output philosophy that should pay dividends in establishing a fervent, if not growing, following that bubbles from the underground. Grand Sun Ritual has that epic doom/post-metal grandiose songwriting, bluesy/emotive lead breaks, and brilliant execution to take Coldun to great places not just critically, but also win the hearts of music fans the world over.