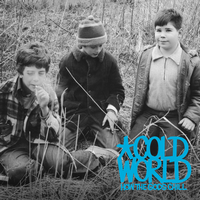 Time hasn’t done much to distort how important Roadrunner Records were in the early 90s. A lot of what the label put out at the time usually amounted to something, including some bands with commercial and/or major label aspirations, like Biohazard and Life of Agony. The pair’s output at that particular time was easily their best; we’re referring to Urban Discipline and River Runs Red, of course, which should have brought forth the usual onslaught of sound-alikes and successors. Oddly enough, that never quite happened until Wilkes-Barre, PA’s Cold World popped up in 2005.

The band has two albums to their credit, the first being 2008’s Dedicated to Babies Whose Feet Came First (awesome title) and the body of work in question, How the Gods Chill. Hardcore metal is the primary reference point, although this isn’t really beatdown-core where the riffs are too simple to comprehend and a beatdown/breakdown/whatever happens every 90 seconds. Rather, Cold World plays a riff and groove heavy brand of metallic hardcore without blatant tough-guy overtones, opting for an intelligent delivery in the vocal department that isn’t too far off from Biohazard (see: “Omega”) or the melodically-inclined “Find Your Way.”

Leaving out some of the raps that are used to break up the running order, the band’s riff palette knows no bounds, most notably on the excellent “Never Knows Best,” which should get the nod for hardcore’s “riff of the year,” if those fine folks saw fit. The buzzing “No More Fun and Games” serves as the album’s most spiteful track, but again, is helped out with another well-sung chorus, while the molten grip of “Blind,” “The Real Deal” and “Youthful Expression 2014” should have zero trouble landing with the metal-on-hardcore crew.

Utterly top-notch stuff for this field, Cold World should become the go-between band between the routinely mentioned metal and hardcore fields. We could certainly use such a band. Regardless of your style of choice, How the Gods Chill slams…and slams hard.