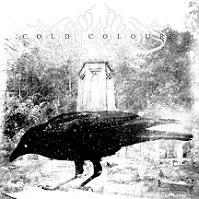 Deception runs amok with the spelling of Cold Colours’ name, for it duped DR into thinking the band was from the U.K., when they’re really from Minnesota. Talk about two different worlds. It seems the band in some form or another has been functional since 1995, previously under the Wolfthorn moniker, then shifting to Cold Colours in 1999 for the release of Somnium XIII in 2000. Since that point, band figurehead Brian James Huebner has largely kept the band under his control and in productive realms, with this self-titled effort coming in as their fourth release.

Huebner and friends (who are really just studio musicians) play an atmospheric style of Gothic doom, spiced up by bits of thrash and death metal. Why they feel the need for speed is anyone’s guess, and while it keeps the album out of the tempo doldrums, it almost cancels out the sullen momentum they’re so apt at creating at the drop of a hat. No matter, for the delicate sprawl of “This Devotion” wraps itself it progressive leaps, while the dark-tinged “Of Sand and Tears” and “Silent Speech” provide more of an all-encompassing jaunt, full of harsh vocal pleas, and Holy Trinity of British doom setups.

Going as far to include a cover of the band they were named after (Rotting Christ’s “Cold Colours”), Cold Colours might be a little too over the map for the conventional doom plunderer. Yet, once some of the songwriting snags are corrected, perhaps Cold Colours will stop being mistaken for a U.K. doom band…not like that’s a bad thing.  Good stuff, nonetheless.