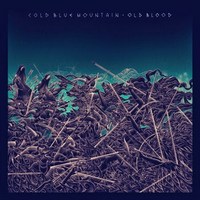 The beer companies have totally thrown the usage of “mountains” out of context, so forgive DR (and yourself) if Cold Blue Mountain translates to some would-be descriptor for watered-down hops and barley. It’s supposed to be a geographical and/or topographical term, you know? Never the matter, for Cold Blue Mountain are a doom-inspired, post-metal melting pot, humming all of the right Isis backdrop melodies, and Neurosis monolithic churns. The band’s second album, Old Blood, is a conceptual body of work about a group of people “taking back what is theirs,” which is an in-direct reference to Native Americans. The concept, coupled with the band’s by-the-book approach make Old Blood a familiar, by relatively enjoyable listen.

Foundationally, the melodies here are what tugs Old Blood along. Because the screams of vocalist Brandon Squyres are so upfront and borderline grating, one needs to sift through the album for the more caressing moments. They’re found on the opening “Seed of Dissent,” where full-crescendo takes flight with ease among Samothrace-like harmonic layering, and on “New Alliances,” where the aforementioned soft strokes and subsequent caressing takes place. However, the general, fat, sludgy riffing the band employs is nothing to go bananas about (see: “Strongest Will”) they’re a mere segue way for a song like “Dissent.”

Since Cold Blue Mountain have patterned themselves after post-metal’s brightest luminaries, the natural commonalities threaten to override the quality pacing and construction of Old Blood. There’s really no missteps here, rather, a band apparently still making their way through a bottleneck of influences that in this context, are simply unavoidable. Then again, execution always counts for something, so in the case of Old Blood and to a larger degree, Cold Blue Mountain, there’s something malleable here that Isis/Cult of Luna/Neurosis runners will fancy.