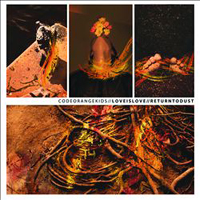 Heard quite a few good things about Code Orange Kids

from the locals here in presently rain-soaked Pittsburgh, PA. Pittsburgh’s music scene does an absolutely horrid job of getting its bands to the next level, yet there’s none of that in its longstanding hardcore faction, where spin-kickers, air ninjas and bandana buddies have taken to this ensemble. As such, the band’s Love is Love/Return to Dust debut pounds the pavement with straightforward hardcore, yet takes several detours into experimental, breathy territory. It’s the exact type of record Deathwish generally puts out, meaning, it’s occasionally abstract, yet thoroughly intense.

Two big selling points, the first being the band’s age, where the average is 18. Factoring in how many bands

under 21 (and over, too) are of the wretched variety, Code Orange Kids’ ability to play something beyond lowest common denominator hardcore is a success onto itself. Secondly, Converge’s Kurt Ballou mans the production board, so one can expect the album to sound charged and suitably raw, which indeed, it does. And given there’s some rangy Converge ideas afoot, one can probably assume the band was stoked to be working with such a prime figure in metal. Teenagers can be so giddy.

The expected straight-hardcore portions are doled out on opener “Flowermouth (The Leech)” and “Sleep (I’ve Been Slipping),” both of which rely heavily upon the bass, driving the songs into crusty territory. Yet it is the forays into avant-garde post-core on “Colors (Into Nothing),” “Calm/Breathe” and closing number “Bloom (Return to Dust)” that pushes the album beyond typical hardcore conventions, heavy enough to appeal to the scene’s core crowd, and with a degree of adventure

that presents the open playing field that the aforementioned Converge, and even labelmates The Great Deceiver are afforded.

An album that sounds beyond the band’s young age, Love is Love/Return to Dust is going to test a lot of people in the hardcore scene, which is a good thing. They’ll stand out without a problem, and once they’re of drinking age, should be one of Deathwish’s top bands.