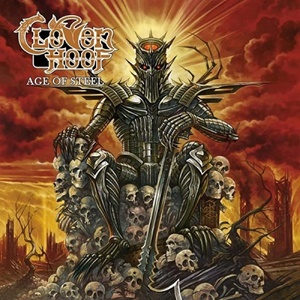 Reestablishing their theatrical-oriented NWOBHM sound after their initial run in the 1980’s, Cloven Hoof appear stronger than ever as they release their eighth studio album Age of Steel. Hot off their worldwide touring excursions which included some time in North America (this scribe catching a show in Poughkeepsie, NY), it’s evident that many metalheads are gravitating towards those legacy or underrated acts that maybe didn’t get their just credit the first time for the quality of their output. Although bassist Lee Payne is the only original member from those early days, the musicians present in this current incarnation aren’t slouches at their skillsets and prove their worth in spades through these ten tracks.

Right away it’s apparent the band wish to deliver heavy/power metal with plenty of melody, harmony, and hook elements from both the vocal and music sides of the coin. The younger musicians push a bit of that modern force with drummer Mark Bristow’s double kick and engaging riffs – “Bathory” a memorable opener because of the shifting power riffs and grandiose aspect with the keyboards, an evil narrative aspect midway through beyond George Call’s soaring range and a chorus that resounds from the skies above. Interesting Iron Maiden-ish parts creep in and out of many songs here – the Seventh Son album in particular sure to come up for a couple of reference points in terms of riffing, phrasing, and specific choruses as “Alderley Edge” the easiest to pick up for its “Seventh Son” like similarities for the main opening riff and subsequent chorus melody. Returning the Dominator character to wield death and destruction across the galaxy, the strength of the riffs and tempos match the spirit of the lyrics brilliantly – dual guitars and galloping parts taking “Touch the Rainbow” into a sure-fire Cloven Hoof mainstay, George again punctuating the words and delivery in dramatic, Bruce Dickinson-like fashion.

The songs fluctuate between a bit more bombastic and cultural elements against some more straight-ahead metal anthem offerings. Many will clap or chant along to the opening tribal-like straight rhythm accents that start the otherwise majestic “Ascension”, while the guitar maniacs of the world will savor the twin harmonies throughout “Judas”. The production values match the best in the traditional and power fields, something veteran artists like Saxon and Accept have kept in mind for the current generation. Add in the final cover art touch that should be poster board material adorning bedroom walls and you’ll know that Cloven Hoof aren’t intent on living on their past glory – they want to establish a creative, potent foothold in today’s scene.

Age of Steel may be tough to top for Cloven Hoof – as its intent and the passion/purity of the execution will not be denied.