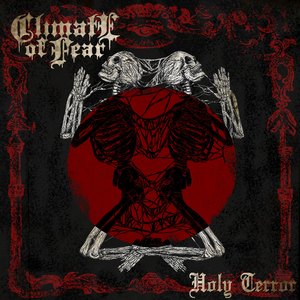 What’s heavier and angrier than regular old hardcore? The darkened variety that has cropped up in more recent years of course! Climate of Fear have taken to the aggressive and metallic end of the subgenre with Holy Terror, an intense 15-minute EP sure to get your body moving.

Featuring plenty of hardcore energy and metallic grit (we’ll avoid the whole ‘metalcore’ thing here), Climate of Fear may sometimes move on the slower tempos, but it only to help gain traction and heaviness. Yes, they may swing into a breakdown every now and again like with “Entombed,” but there’s always a proper buildup and send off to ensure it all comes together nicely. Instead of formulaically flinging them in on a whim, the crushing moments are surrounded by equally heavy mid-tempo riffing and some pleasantly sneaky melodies from time to time. Some of the melodies, such as on the title track, are taken in a thrashy, near-melodeath approach that not only solidifies the harder approach, but ends up enhancing the brutality by giving it a little contrast to feed off of. Slightly more brutal vocal work rounds things out, easing away from the more traditional ‘tough guy’ hardcore sound and giving Climate of Fear more of an individualized attack from time to time.

Even though Holy Terror gets in and back out quick, it does a bang-up job of getting exactly what it wants out of the listener. This is angry and abrasive stuff, and it’s sure to get folks energized. The sometimes melodic and darkened take is just icing on the cake.