Clamfight – I, Versus the Glacier (Maple Forum) 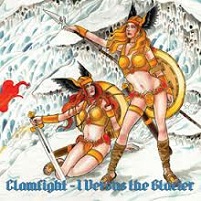 Have to dig the Red Sonya-like cover for I Versus the Glacier. She’s basically the ultimate metal babe, you know? Adventurous, tough, to go along with the physical attributes to make teenagers in the 80’s halt their Dungeons and Dragons game and take notice. That’s probably what Clamfight were going for here; to get some attention on an album that for the most part, is standard issue for sludgey LOUD metal. It should work on most fronts, as I Versus the Glacier has some obvious redeeming qualities that stretch beyond an appearance that no doubt is taking the piss out of metal.

Many will surely point to the band’s riff abilities, and rightfully so. Clamfight (who are from New Jersey; would be way cooler if they were from one of the New England states) have done the smart thing by relaxing the maximum overdrive of their peers, tossing in even-handed turns of melody (“The Eagle”), while squatting with hairy-chested doom (“Age of Reptiles”). Naturally, some uniformity sets in, only because Clamfight don’t make any attempts at breaking away from monolithic stoner doom dungeon. The instrumental “Tower of the Elephant II” at least provides a getaway from the uni-man roar of singer/drummer Andy Martin. In spite of his position behind the throne (Phill Collins/King Fowley-style), he’s unfortunately the most generic and faceless aspect of the band. But, aren’t all singers in this style like this at the present time anyway?

With flaws not as evident as their more prominent bushwhackers, Clamfight prove there’s still some shred of hope for versatility in this field. That’s the overriding sentiment here, although you shouldn’t feel bad if you can’t distinguish I Versus the Glacier from the rest of the pack.