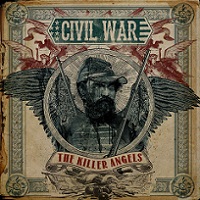 In early 2012, a mass exodus took place when Rikard Sunden, Oskar Montelius, Daniel Mullback, and Daniel Myhr all left Swedish power metal band Sabaton. The move was shocking to say the least, but ultimately this group set their ambitions high when they recruited vocalist Nils Patrick Johansson and announced the formation of Civil War, and subsequent release of their The Killer Angels debut.

Leaving a popular and well-established band like Sabaton could be considered a risky move, but all the guys involved prove their mettle here in spades. In fact, the music of Civil War is lean, heavily infused with more melodic rock roots and definitely speedier than what was achieved on the last few Sabaton albums. The lyrical content treads similar waters, but there is a renewed sense of purpose and more specifically, a focus on the American Civil War for inspiration. These themes of war, injustice and revolution provide much of the fodder on songs like “Gettysburg” and “March Across the Belt,” proving they have something new to add to the power metal cannon.

The big selling point for Civil War is Johansson. He’s become the quintessential power metal singer with an impressive pedigree of stints in bands like Astral Doors, Lion’s Share and Wuthering Heights. His Dio-like snarl is the main feature of his singing style I find appealing and his presence is effective on tracks like “King of the Sun,” “Lucifer’s Court” and “My Own Worst Enemy.” Johansson also brings more character into the band’s overall sound and a dash of fresh energy is evident throughout the majority of tracks on this first release.

On a whole, The Killer Angels is a perfect debut for well established players striking out on their own again. Guitarists Sunden and Montelius continue to streamline their riffs, providing a melodic aggressiveness into the core sound allowing Johansson a chance to flex some muscles vocally. All the while, other members like Mullback on drums, Pizza on bass and Myhr on keyboards fit nicely into the grand scheme of things, creating a strong rhythm section to bolster the front line players. Civil War is on the rise and future looks bright for this group.