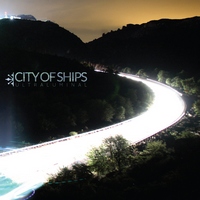 A change in sound for a band who did fared quite well for themselves (critically) with 2009’s excellent Look What God Did To Us, and 2012’s Minor World. City of Ships (the outfit in question) have shifted into more accessible rock territory, moving away from the enigmatic atmospheric push they had come to master. Furthermore, City of Ships have shed most of the heavier elements that gave their tunes weight (obviously), which essentially casts the band in an entirely different light and mode with Ultraluminal. If anything, they’re primed for an indie rock lift-off, not underground rock/metal stability.

DR would be remiss if we didn’t mention our fondness for simple and/or basic rock songs with hooks, which is exactly where City of Ships are trying to go. Vocalist Eric Jernigan has lapped up a 90’s alt-rock radio type of approach, which puts the spotlight on how well enunciated and emotive he really is, as heard on “Alarm” and the drum-heavy “Metadata Blues.” The grunge bounce of “Private Party” sees basic punk chords lifted into dirtier landscapes, made all the more merry because of a sing-songy chorus from Jernigan, which is probably his best on the album. As mentioned, there’s not as many atmospheric adventures, although the band packs a little bit of those elements into “Hardwired,” which features some gnarly distorted bass, and more active drumming courtesy of Eric Soelzer, who is placed prominently in the mix.

The general adage is that full-fledged, dyed-in-the-wool metal bands aren’t allowed to make such shifts in the way City of Ships did with Ultraluminal. It’s partly true because the band weren’t full-bore on the metal scale to begin with. Therefore, with the trio now plundering more friendly terrain, it’s fully acceptable, even welcomed, mainly because the songs are there. May the hip rock kids gobble these lads up pronto.