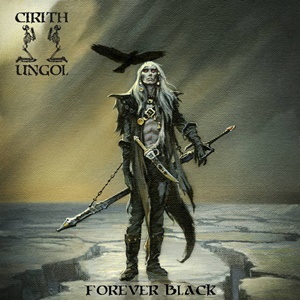 Legacy artists from any metal era wishing to relive glory days with a new generation of fans discovering their sound can be a slippery slope – especially when they decide to record a new studio album. Ventura, California’s Cirith Ungol has had a cult following for their previous four albums – a heavy/doom metal band quite unique against the power/thrash scene developing around them. Back together for a few years doing reunion shows in North America and Europe, we arrive at their first full-length in a recording studio since Paradise Lost from 1991. Given three original members still in the fold and second axe man Jim Barraza a part of the group during the tail end of the 1988-1992 period, only bassist Jarvis Leatherby is a ‘new’ member – his cache with Night Demon relevant enough to hold down those duties. How does Forever Black hold up against the previous discography?

Well, there’s no disputing the better production values of these nine tracks right out of the gate. Armand John Lizzy of Night Demon knowing best how to capture the quintet at that potent, in your face value where the guitars shimmer, the drumming very pocket protected a la the 70’s/early 80’s, a thick bass tone giving more depth and allowing vocalist Tim Baker to shatter the earth through his evil screams and goose bump provoking melodic doom pipes. Slow headbanging should ensue when the tribal-like tempo and riffs pound from “The Frost Monstreme”, while the follow-up “The Fire Divine” turns on the more classic hard rock charm, bringing some anthem strains in an early UFO/Montrose atmosphere, the bluesy lead tradeoffs and harmonization between Jim and Greg Lindstrom set to mesmerize in a searing bliss. Those seeking perfection in Cirith Ungol need to understand that we are dealing with musicians in their late 50’s/early 60’s outside of Leatherby, so there are those slight imperfections that shape a song like “Stormbringer” into a specific charm, be it Tim’s lower register in the opening verse or drummer Robert Garven playing slightly behind the main musical hook. When you want an epic, mountain top feel, there’s nothing better than the crushing cascade of notes flying against the doom passages for “Nightmare” as well as the titanic title track, the bass play adding that sophistication against the heaviness present.

Smartly keeping the proceedings at vinyl format times in under 40 minutes, Forever Black has the right intention and spirit of Cirith Ungol – not trying to reinvent the wheel, just churning out more doom-laden heavy metal. And at least before they go off into the sunset, they can be proud of these memories, shows, and album.