There’s nothing breezy about the quality of metal making its way out of the “Windy City” so far this year.  Released at the same time as Warforged’s debut EP, Cimmerian have unleashed their sophomore effort, Hollowing, to the masses as well.  Focused in the musical stylings of progressive death metal (showering it with the melodic death metal tag will only bring an unneeded stigma), Cimmerian also tie in the atmosphere and melancholy of bands like Insomnium and Omnium Gatherum as well as an occasional foray into blackened melodic riffs to play into a comfortable dynamic of light and darkness.  The band also uses a wealth of piano and keys to enhance the emotion of each track.

With Hollowing only being the band’s second effort, the songwriting here is impeccable.  This strength is best evidenced by the closing instrumental “Introversion.”  Not normally one to sit through long instrumental tracks more than once, which “Introversion” clocks in at 7:38, the playful guitar melodies/leads and downright heavy riff at around four minutes makes it one of the standout tracks of the album.  Likewise, the almost 9-minute “Dissident Voices” is so chock-full of memorable moments, like the guitar-to-keyboard lead about six minutes in, that you won’t even realize the lengthy track has already come to a close.  Furthermore, the lush acoustics that lead off “The Subterfuge” will entice you into an even more serene riff overlaying some surprisingly emotive roars.  If you need more power, pre-release track, “Among Ghosts, We Slept” has a lively main riff that feels more urgent than most melodic death metal fare.

Cimmerian is truly onto something with Hollowing.  Catchy where it needs to be while maintaining the melancholic atmosphere and not veering into “commercial” territory is a tricky bit to pull-off.  They do it with grace and finesse, it’s only a matter of time before some labels start to pick up the trail and scoop these guys up quick. 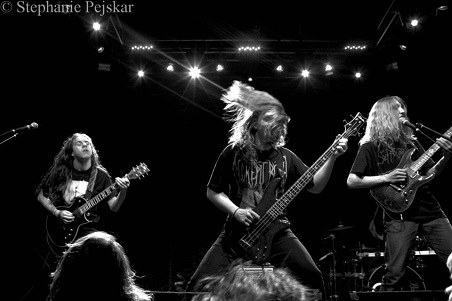