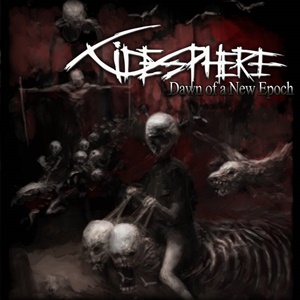 Considered one of Turkey’s most respected underground bands, Cidesphere began in 1998, releasing a split album in 2000 with Suicide before their first full-length in 2002 entitled Interment. They would split up in 2004 before reuniting in 2018, unleashing their second album Dawn of a New Epoch. Four of the five members from that first incarnation are on board, providing legitimacy to the cause at hand – recruiting new drummer Goremaster to the fold. And it’s apparent that these gentlemen live for the Swedish wave of melodic death/thrash extremity that puts acts like At the Gates, Hypocrisy, and Dissection on the map.

The formula reverberates around darker power chord/riffing crunch, a steady supply of mid-tempo to slightly faster drum templates and the proper pounding transitions/ groove hooks along with the extreme edge for vocal growls/screams. When the band chooses to be calmer for say the opening section of “Living Scars” or the title track, it’s usually followed by blackened style electricity and bellowing vocalization from the grave where you can imagine fog, incense, or relentless hair windmills. There’s a certain madness and militant focus to the brutality that coupled with the catchier refrains out of guitarists Taylan First and Aydm Aytac will attract attention right away for “Reborn into Extinction”, while they also execute some emotionally engaging clean to electric interplay that puts “March of the Backstabbers” on highlight status. The choppy riffs and slamming nature that start off “Hate Design” provide a bit of dynamic twist to the proceedings, Goremaster showing a bit more of his groove chops against his conventional melodic death/thrash ways where he can pummel his snare and double kick like the best in his field.

Cidesphere slot into that niche of late 90’s/early 2000’s acts previously mentioned – crafting and executing a record that isn’t exactly going to scream of originality but does deliver plenty of exciting moments. Dawn of a New Epoch should give this revitalized quintet another shot at developing a decent buzz beyond Turkey and into the hearts of the international fans.