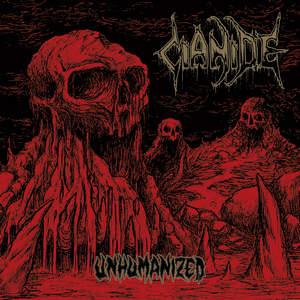 Though they’ve managed to stay a bit more underappreciated and overlooked than some of their peers, Chicago’s Cianide have been delivering primitive death metal (laced with doom) for over 30 years at this point. This scribe still remembers hearing The Dying Truth and being pulled in by its menacing cover art, and suitably dark tones within. Unhumanized sees the band still going strong in that straight-forward and bleak direction.

The first thing that really catches one’s ear on Unhumanized is the utterly filthy guitar tone. It’s not another one of those HM-2 buzzsaws, instead it’s altogether like the guitars were fed into a mud bog and recorded while doing so. This is a compliment in every way, with the absolutely massive sound granting the EP a large portion of its appeal. But of course it’s not the only thing Cianide has going for them. Their sheer primal essence, along with the guitar tone, really gives them a lot of success. The muddier aspects feel well adjusted to when the band is both trying to rapidly riff away in the faster, and more deathly sections – there’s nothing but blunt force aggression to this particular style and certainly no compromise. But when they slow into doomier waters, that sludgy feel makes the music feel even more putrid, whether it’s a mid-tempo stomp or a plodding riff (see all in the opener “Serpent’s Wake”), you are going to feel it in your bones. The switchups between tempo help to keep the listener’s interest piqued, as the thrilling charge of “Traitors” helps to make the slow burn of “Shadow of the Claw” even more dramatic.

Still going strong through decades of material, Cianide raise the flag high for pure death metal brutality with some doomy despair. Unhumanized is short but sweet in its display of raging riffs and bleak dirges, but Cianide make every second count with direct and crushing displays.