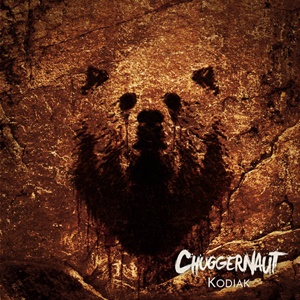 Self-proclaimed as ‘regressive metal’, Boston’s Chuggernaut (what a cool band name!) live for the almighty riff on their latest EP release Kodiak. Evolving since their 2013 beginnings through lineup changes and releasing a previous First Batch EP in 2016 and two subsequent singles, the quartet push out a sound that can be abrasive, melodic, and shape shifting – incorporating everything from doom to post-hardcore, southern groove and blues to thrash while attaining this groove factor that is undeniable. Add in that solid, memorable singer component and you have the makings of a future set of stars ascending the ranks based on quality output and incredible performances.

Dave Cohen and Dave Marvuglio as a guitar/bass tandem slam home some serious down-tuned chord progressions drenched in bluesy emotion, but using the overdrive that electric amplification channels into groove metal bliss. Check out the mid-tempo action for “Control Burn” and the subsequent doom/post-hardcore action for the follow-up “Disposable Monuments” and you’ll surely be swept into their hypnotic cocktail combinations. At one moment you think you are submerged in an Alice in Chains/Soundgarden meets Crowbar swirl, then taking into a Corrosion of Conformity meets Gojira feel on the next track – equally captivated by the vocals that can be sludge-oriented with caustic, drawn out screams or smoother in a Chris Cornell-esque fashion. Personal favorite “Black Lung” spits out this jackhammer rhythm while intertwining atmospheric clean guitar accents, allowing vocalist Dave Benites to weave his lower to high octane bluesy delivery to hold even more attention to the incessant groove and hooks throughout, including a fiery lead break and subsequent headbanging playoff between the singing and instrumentation. Most will enjoy the robust production – the thick tones and snappy drum action never fatiguing, making these five songs fly by in 24 minutes.

Considering New England is a melting pot of influences across the musical spectrum, it’s little wonder that Chuggernaut take advantage of their roots and environment to issue a potent product for Kodiak. Expect much audience interaction when the four-piece take this material to the stage, as it’s the type that can keep multiple groups of metalheads young and old bobbing, wind milling, and throwing constant devil horns to the sky for approval.