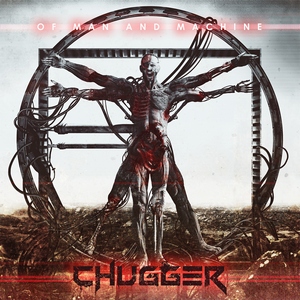 In the accurate band description through name, Chugger totally nails it. They are a Swedish groove metal band that, you guessed it, spends a lot of time in the mid-tempo range. Of Man and Machine is their second album, following up 2015’s Human Plague. It sticks to many of the conventions of the genre, but it’s still an enjoyable effort due to the melodic elements they have woven in.

As already noted, the name of the band does kind of say it all here. The sound tends to pull from Swedish melodic death metal (not the type with commercially driven choruses mind you) and a generous helping of grooviness from the USA (think Machine Head as a reference point). The mid-tempo is clearly the favored speed of the act, but they do increase and decrease a bit from time to time to mix it up a bit. But, as their strength, this tempo is quite open to bringing in plenty of melodies to make the landscape more attractive. Whether it’s a catchy lead (see “Pigs to Slaughter”) or a real stomp-friendly riff (see “Beg, Burn, Fear”), there’s usually something to catch your ear. But on the same token, keeping the tempos groovy does make for an experience that starts to meld together by the time it finishes up, and while some more driving moments do pop up (see “Flatline”) they don’t do enough to break out of the band’s patterns.

If groove is your thing, Chugger know how to bring in plenty of it on Of Man and Machine. While it does limit some other things, the band’s use of melody is solid and keeps the album above water.