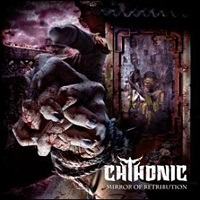 It sometimes seems that the idea of Chthonic is better than the reality. The Taiwanese symphonic black metal band came to the attention of Western audiences with the release of Seediq Bale in 2005. A brutal, bloodsoaked album it dealt with the story of the aboriginal Seediq Bale and their uprising in 1930 after the Japanese invasion of Taiwan. Chthonic went on to play Ozzfest in the states, Wacken Open Air in Germany and landed a support slot with Nile.

With Mirror Of Retribution Chthonic look set to capitalise on the unique buzz surrounding them and while it’s a strong album, it lacks a certain punch. Sonically, the songs

never divert from the middle range, there are no soaring heights or trembling lows, which overall lends a kind of neutral air to the record.

Overall it’s fair to say that Chthonic come across like a mix between Abigail Williams and Devildriver. Vocally Freddy Lim has a good voice and, like the rest of the music, keeps it steadily in the mid-range, so the Dani Filth glass shattering squeals are kept to a minimum, which is quite nice. The likes of “Hearts Condemned,” “Rise Of The Shadows” and “Venom In My Veins” are feisty tracks with a lot of oomph and melodic bloody rose thorns acting as hooks.

That nice sense of melody runs deeply through the album, but that’s not what causes it to slip up, it’s more that you feel there’s something missing. That it could have been something more, which is where the reality of Chthonic kicks in. The arguments about what constitutes black metal are tired and overdone at this stage, but you get the feeling that this could have been darker. It shares the same production values as recent Cradle of Filth records and many of the tracks could quite easily be mistaken as such (“Forty-Nine Theurgy Chains”).

lines over the top and have that hoarse, demonic impersonation vocal.

Generally, the thing about Mirror Of Retribution is that many fans of harder music will hear this as being either tame or else nothing new. The use of the erhu, a traditional bowed Chinese violin, adds a melancholy air to the songs and the similarity to a wailing woman is unmistakable. It’d be nice if so much more of the music didn’t just sound like Western metal. If you’ve yet to hear it thenSeediq Bale is the place to start.