Chthonic Cult – I Am the Scourge of Eternity (Iron Bonehead) 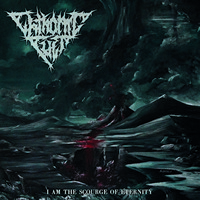 Long purveyors of primitive and evil sounding metal, Iron Bonehead seems to know how to pick them. Polish/Germany death/black hybrid Chthonic Cult is the latest release from the venerable label, and seems to fit right into that sweet spot that the label often provides, for better or worse.

I Am the Scourge of Eternity contains only four tracks, but provides over 45 minutes of blackened death metal with a pinch of doom. The feel is (as one would imagine) a bit on the old school side. One can pick up on the influences of bands like Celtic Frost and Hellhammer, but there’s just as much ‘90s death metal here as anything else. One of the strongest assets of the band is their ominous guitar tone, particularly at the slower range. “Asunder!” opens with an absolutely rotten guitar riff that is practically hypnotizing in tone. Later in the track, some slower riffs offer a doomier approach that is suitably bleak and some lead work permeates the surroundings. The only real problem that one faces with Chthonic Cult is that the songs do tend to carry themselves a bit longer than needed. Sometimes a riff seems to outlast its effectiveness, and despite a number of tempo changes, things meander a bit more than one would like.

Chthonic Cult are covering some pretty familiar territory with I Am the Scourge of Eternity, but the overall feeling gives off some positive vibes. They’ve got a good grasp on the approach, and with some effective song editing, the next round of material could unleash some even more potent ideas (particularly in the riff area).