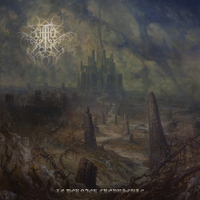 Demilich was a band that was severely ahead of their time. Labyrinthine time changes, croaked vocals, filthy atmosphere are all qualities that death metal bands are still trying to replicate today. But strangely, the number of bands that cite Demilich as a direct influence are few and are between (though label mates Artificial Brain do come to mind here). Which is why if you are looking for a band that captures that same essence as Demilich did, Chthe’ilist should be sought out.

Taking the Lovecraftian death metal approach that has been picking up steam, Chthe’ilist kindly put their own spin on things. This is some superbly filthy and dark death metal with otherworldly bellows and croaks (seemingly rooted in the old Finnish tradition), but at the same time, there’s an accessibility here that Chthe’ilist manages to conjure without spoiling that cavernous spirit. There’s some added synths here and there (notably opening up “Taste of the Majora Mythos Part I”) that supplement the mysterious sound they’ve developed. As do some tastefully done chanted vocals that only appear in a few, select tracks (like “Into the Vaults of Ingurgitating Obscurity”). But Chthe’ilist’s strongest weapon is that of their melodies. Yes, melodies. In addition to some technical aspects in the riff department, each track manages to bask in a number of oddly melodic leads that surprisingly don’t break the dark atmosphere. There’s never a dull moment, as this combination of the intricate melodies with the twisted death metal backbone moves between frequent time changes to keep things fresh as the atmosphere plummets into chaos.

Between the memorable riffs and standout leadwork, Le Dernier Crépuscule successfully incorporates melody into the death metal format in a way that few can. Otherworldly, dark, and brutal, but channeling sci-fi elements and captivating songwriting to create something that is as dreadful as it is delightful.