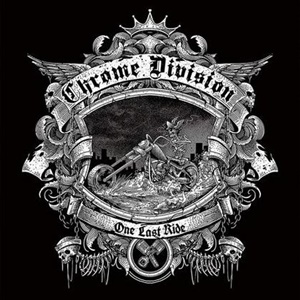 Leather-clad and ready for more boozing and cruising, Chrome Division felt the time to retire is now, just after celebrating their 15th anniversary together as a band. Reuniting with their first singer Eddie Guz for the first time since the second album Booze, Broads and Beelzebub, it’s evident that with their fifth full-length One Last Ride that the five-piece aim to keep their brand of throwback, blues-based hard rock sharp while lobbing the occasional twist into the mix to keep your ears perked up as the alcohol flows and your inhibition goes.

These gentlemen don’t mess around with their large hooks and gritty melodies – a raspy snarl from Eddie fires up the charges during “So Fragile” and the mid-tempo/cowbell groove monster “Staying Until the End”. Mr. Damage and Shagrath lay down some solid guitar foundations and build upon them with some fiery breaks that delve deep into a love of Kiss, AC/DC, Iron Maiden, Black Sabbath, and of course the mighty Motörhead. They may not admit it, but you can hear a “Wild Child”/W.A.S.P. aura about “This One Is Wild”, while “You Are Dead to Me” flows through some Thin Lizzy/blues main musical hook into an instrumental section that is part early Maiden, part “Love Gun”. It’s four on the floor mechanics, even when they choose to add in some slide guitar action for the title track, where Eddie name drops many former members of the band as well as thanking the fans for their undying support. And what Chrome Division album wouldn’t be complete without an ode to alcohol – the double bass driven “We Drink” asks you to ‘take those glasses and get it right/ I’m kinda thirsty and I can’t wait all night’, so you better prepare for solid liver damage after ingesting this record a few times.

Rock ‘n’ roll originally developed out of a need for the youth to express their thoughts in an energetic manner in the hopes of entertaining people. Chrome Division get back to those roots, and end on a fine note for One Last Ride – hear the motors rev up into the sunset.