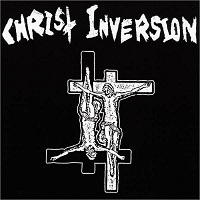 Phil Anselmo post-Pantera has been a mess. Outside of Down’s capable, but hardly world-beating III from 2007, the man’s work in the awful Superjoint Ritual and Arson Anthem has been pretty below average and we’re talking Damageplan below average, Dime RIP. It’s no secret the man has had a certain fondness for low-grade, necro black metal and we get to see that side with his long-defunct Christ Inversion.

On this re-release of a 1994 demo, Anselmo handles guitars, with Wayne Fabra on vocals, Jay Gracianette on bass, Ross Karpelman on keyboards, and Gary Herbert on drums. The motive here, is to bring forth Anselmo’s keen interest in Satanism to the forefront and given the time and context, this pales in comparison to the releases of that time – Darkthrone’s Translyvanian Hungerand Emperor’s In the Nightside Eclipse to name just a few.

Not a whole lot to write about here – Christ Inversion was kept at demo-level by Anselmo for a reason and had this come out during Pantera’s heyday, surely a lot of feathers would be ruffled, and better yet, Anselmo’s street cred with his Norwegian BM buddies would take a mighty hit.