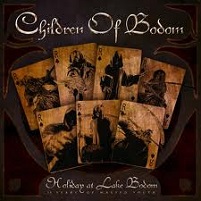 In the presser for this release, main Bodom man Alexi Laiho stated how the band was “justified to put this out” and he’s right – they are. Considering the Finns were deemed nothing more than the Yngwie version of melodic death metal when they broke in the late 90’s, Children of Bodom’s exhaustive legwork and stellar studio output (sans Blooddrunk) has made them a global metal force. All the compilation Holiday At Lake Bodom (15 Years of Wasted Youth)does is remind us of how far the band has come.

Consisting of 20 tracks and a bonus disc with backstage footage and the making of the “Shovel Knockout” video, Holiday At Lake Bodom covers an immense amount of ground, essentially focusing on the band’s “hits,” if you will. Therefore, no real surprises, with live staples “Hate Me,” “Everytime I Die,” “Living Dead Beat,” and “In Your Face” (the best song here) becoming the real go-tracks, while older cuts “Deadnight Warrior,” “Silent Night, Bodom Night” and “Downfall” take us back to a time when Bodom was still learning how to harness their vast musical skills into digestible compositions.

Long known for their fun covers (see: Britney Spears, Poison, etc.), Bodom have recorded renditions of Dropkick Murphy’s “Shipping Off to Boston” and Rick Springfield’s “Jessie’s Girl.” The latter is of particular interest, with the Finns adding a playful touch to a song that is about as poppy as one can get, further embellished by Janne Warmen’s cheesy snyth sound and Laiho’s spit-laden vocals. It’s a real gem.

As we noted in a July 2011 concert review of Children of Bodom in Pittsburgh, their back catalog is just as strong, if not stronger than the songs they normally pimp out. The band could probably pop out something ala Gamma Ray’sSkeletons in the Closet, which was a compilation of GR’s less popular, but equally-as-enjoyable songs. At any rate, Holiday At Lake Bodom wraps up the band’s first 15 years rather nicely. Here’s to another 15, gents.