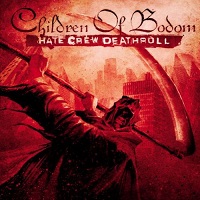 Originally released in 2003 and now getting a fresh lease of life through Spinefarm UK’s series of reissues comes Children Of Bodom’s Hate Crew Deathroll The album which took them to number one in their native Finland and brought them to the attention of the world at large. Hate Crew Deathroll was the record which started the Bodom boys (although in some photos you could find yourself questioning whether they’re all male) on the road to where they are today, but looking back on it, is it actually any use?

Of course it is. Although, if you’ve yet to jump on board by the Bodom rollercoaster then it’s doubtful that listening back to this nine-tracker is going to change your mind, but you never know. Bodom in a live setting can win people over who might never invest in an album of there’s, but if you do decide to indulge Hate Crew. is the one to go with.

Starting as it does with the one-two punch of “Needled 24/7” and “Sixpounder,” this is Bodom in fine form, all big riffs and hooks, Alexi Laiho’s vocals are delivered in that accented English, which gives the songs an extra shine. Yes, Bodom do tend to like things polished and clean and it shows throughout, even the bonus tracks (Slayer’s “Silent Scream” and The Ramones’ “Somebody Put Something In My Drink”) have been given the treatment and come out gleaming. The Ramones’ cover in particular is excellent, metal-tinged punk but as always with an infectious nature.

“Sixpounder” packs in a vicious Black Label Society style riff that rocks along nicely, heavily distorted and slightly different to their usual fare, while “Angels Don’t Kill” remains a brilliant almost pop song. “Triple Corpse Hammerblow” is a little bit like In Flames running riot inside Alexi’s mind and through the speakers. Of course they do at times threaten to become a little cheesy, but manage to always skirt around it, but the cornering is always tight.

The songwriting is solid, if at times a little bit all over the place in terms of influences but it’s because they draw styles from across the board, which is why you do get dangerously close to big pop choruses, such as in ‘Angels Don’t Kill’. This is of course the band who would go on to cover Britney Spears after all. Then again alongside this you’ve got the likes of “Bodom Beach Terror” and “Chokehold (Cocked And Loaded)” which do retaliate against this.

Bodom were never ones to shy away from mixing up styles and still aren’t for that matter. On Death Crew… they managed to rope in a bit of power metal (some of the guitar work throughout is very like an edited Dragonforce), melodic death metal and thrash while still keeping their own stamp clear on things, even with the keyboards toned down.

A great album, the final version will apparently feature expanded artwork (which didn’t come with the promo) and a video for “Sixpounder” alongside the aforementioned covers (they’re on the Japanese release already, so some of you may already have them) and a live cut of “Needled 24/7.” What does this mean? If you already own this it’s going to be a waste of money picking it up again, otherwise for you newcomers, it’s extremely solid, if a little on the short side.