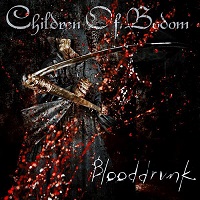 Three years removed from one of ’05 best albums in Are You Dead Yet?Alexi and his boys of Bodom return with Blooddrunk, yet another high-profile Euro metal album to hit the shelves for April. In relation to Are You Dead Yet?,Blooddrunk is a tad more spikey, aggressive, more akin to Hatecrew Deathroll, but a worthy addition to the Bodom pantheon nonetheless.

Over the years, Laiho has gradually drifted away from his early classical metal leanings, a trait none more evident than here, as his fluid melodies reak more of Euro power metal bombast than anything. When merged with keyboardist Janne Warmen’s lightning-fingered runs (see “Lobodomy”), the result is golden.

The lead single and title track might not be a hit from the get-go like “Are You Dead Yet?” (the song) was, but has some icy keyboard moves from Warmen (this album’s MVP) towards the back end. “One Day You Will Cry” glides with razor-sharp precision, Warmen’s contributions bringing forth the real results, while “Tie My Rope” harkens back to the Hatecrew album, with those tumbling, rumbling riffs picking up major steam at the onset.

“Banned From Heaven” is the album’s obligatory slow melodic number ala “Angels Don’t Kill” and “Punch Me I Bleed.” This is perhaps the most appealing aspect of Bodom outside of their flashy solos and bravado – the gradual and soothing melodies of this song (and the other two) are something Bodom should explore more in the future, as it could open up a few doors commercially.

Blooddrunk falls short in matching Are You Dead Yet?, for it is without those immediate, drunken Maiden songs that keep you coming back for more, but still, Bodom remain the preeminent band in the Finnish metal scene and Blooddrunk is another killer.