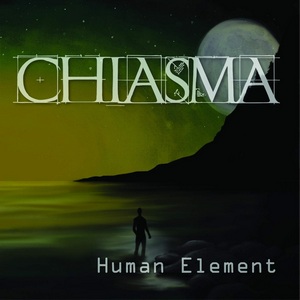 Initially catching wind of Chiasma due to vocalist Katie Thompson adding some guest vocals to the last Fallujah album, Chiasma easily found their way into a Sifting Through Bandcamp column with a pre-release of “Starboard” as a single earlier this year. Human Element is their sophomore effort (which includes “Starboard”), and if all is right with the world, should draw some additional attention towards the Indianapolis act.

Falling squarely into the more melodic segment of the progressive metal genre, Chiasma bring a varied yet modern approach to their music. There’s a delicate balance between heavier riffs and gentle atmosphere, with the band equally adept at either setting. Playful yet intricate riffs that fill tracks like “Circles” and “Fighter” will draw you in with their flow and Chiasma does well to avoid getting wrapped up in taking things too far overboard. Songs feel like songs instead of stale technical marvels, which is aided by the more mellow moments, which can incorporate keyboards, electronics, and clean guitar to switch things up. Of course, at the center of it all is Thompson, who delivers a standout vocal performance. Soaring vocal choruses, such as on “Afterglow” and “Urgent,” show her ability to elevate the emotive nature of the songs but things don’t end there. Some songs are sprinkled with vocoder usage, which gives a new and experimental dimension to the songs in a tasteful manner. And then there’s the album’s most intriguing track, “Narcissus and Echo,” which wings from funky grooves to atmospheric and acoustic melodies to an urgent finale that moves into death metal territory. Thompson veers accordingly, going from near spoken-word to sweet singing to raspy screams at the end (alternating lines with growls from guitarist Ian Inman).

Human Element delivers a fresh take on the progressive metal spectrum. Their ability to think outside the box in regards to instrumentation and vocals gives them a sound that takes the right amount of complexity and balances it with emotive atmosphere, giving it a richness that neither side could accomplish on their own. It’s also the type of album that reveals additional layers each time you listen in, rewarding fans who take the time to give it a thorough investigation. Chiasma have the goods to step up to the next level, and should be a band to watch for in the prog circles.