Chariots of the Gods – Tides of War (Self-Released) 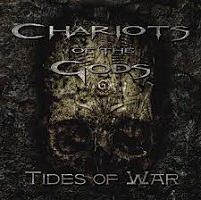 There is a new pipeline coming out of Ottawa, ON/Gatineau, QC for bands who toe the line between death and thrash. One of these bands is Chariots of the Gods, and having just released their debut full length, it’s safe to say they might be the band leading the charge.

The crux of the songs can be a bit generic sounding, but that is due mostly to vocalist Renaud Jobin lacking in variation. His vocals have been described as “rioting” in the press release, but I found myself getting cold the longer I listened to him sing. In many ways he comes across not unlike Leif Jensen of Dew Scented fame, although perhaps a bit less brutish sounding. Jobin needs to mix it up a bit if he intends to carry the sound of the band on a nightly basis and without question, he has the right group of guys to achieve this.

The searing leads and gripping melodies will definitely challenge the listener, and in particular on the second half of this release when many of the solos become noteworthy. A song like “Severing Bloodlines” is proof of the band’s musical prowess and the overall strength of Tides of War comes to fruition on tracks six through 12. Guitarists Mathieu St-Amour and Dimitri Gervais can take full credit for the melodic assault on display here and it comes with much complexity and a tight focus to craft the desired sound of the band.

As a whole, Tides of War offers music that is well done and fueled with the propensity of delivering solid melodic death/thrash. If anything, what the band truly needs is to fine-tune the vocals more and they should be off and running in a furious blitzkrieg to help lead the charge of bands coming out of Quebec. You can’t go wrong if you decide to give this release a try and the more converts Chariots of the Gods bring to the cause, the better this will be for the band in the long run.