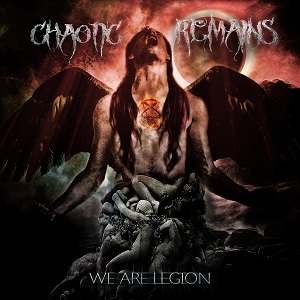 As more raw and/or necro styles of black metal come to the fore, symphonic black metal keeps getting the cold shoulder. One cannot help but remember the fuss it caused as the century turned over, with the scene’s high-ranking bands citing it as “Gothic,” rather than just admitting keyboards can play a dominant role in BM. The lack of any new, fresh, high-ranking symphonic black metal bands leaves a void for younger acts, like Malta’s Chaotic Remains, who are trying their hand at keyboard-happy BM on We Are Legion.

The keyboards of William (a shame Chaotic Remains does not use clever stage names) are the primary facet of the band’s sound. He gets top billing in the mix, thus, shoving the guitars to the back, all the while competing with a brash, otherwise “loud” drum sound. It all makes for a…chaotic listen. Still, the staccato breaks that highlight “Fate in the Abyss” and the swirling “The Fallen King” are, as you would expect, highly orchestrated listens, featuring the type of keyboard-versus-guitar push and pull that came to prominence roughly 20 years ago. Chaotic Remains, to their credit, don’t appear to be trying to be revivalists, though.

Packaged in a relatively tight seven songs, you’re going to get a lot out of what Chaotic Remains have to offer. The band may put their songs together in somewhat of a disjointed fashion, but, it’s a whirling, wild ride from a group of dudes who sound larger than life. That’s why you plug keyboards into black metal.