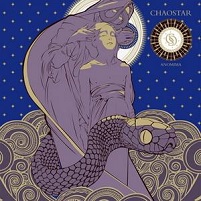 Named after the song of the same name on Septicflesh’s 1999 Revolution DNA album, Chaostar the side project of SF guitarist Christos Antoniou. Since most side-projects are the end-around way of putting on display how an artist really wants to be creative, the ambient sounds of Anomima suggest that Antoniou is responsible for Septic’s recent forays into orchestral metal. It almost makes sense – the band wasn’t in symphonic land until their 2008 Communion comeback, and went overboard with it on 2011’s The Great Mass. So perhaps these are just leftover movements…or something.

Joining Antoniou is opera vocalist Androniki Skoula, who provides the only true accessible moments in an otherwise hazy and far too abstract album. On cuts such as “Sorrow Descending,” “Medea,” and “The Charmer,” she has no problem introducing herself to the party. Her timbre is bold and instantly head-turning, probably because there’s so little going on in the music that resonates. Antoniou’s compositions are simply too disjointed and benign, and even the guest vocal appearance from Morbid Angel’s David Vincent on “Medea,” which gets lost underneath some techno and the operatic vocals.

Figuring that the metal crowd is as open-minded as he, Antoniou might have made a bit of miscalculation with Anomima. To wit, Septicflesh’s music has long been the thorny branch in black and death metal’s side, often prone to experimentation and being quirky without sacrificing any darkness, but this is tuneless background music.