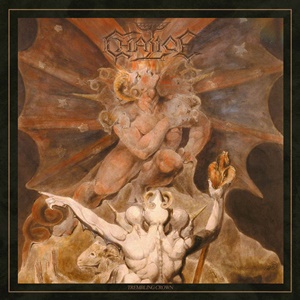 Composing songs over the past five years, Finnish melodic heavy metal band Chalice have been slowly establishing themselves – releasing a 2017 demo and three-song seven-inch follow up “Silver Cloak” last year. Trembling Crown as the debut full-length explores more of their epic-oriented material, giving the listener seven tracks of engaging riffs, unique vocal melodies, and semi-progressive tempo changes that certainly evoke memories of 70’s and 80’s-eras for metal and beyond.

Pagan-like guitar melodies penetrate “Night’s Hands”, the alluring rhythms circular against the progressive tempo changes – while the follow-up title cut features some fascinating Wishbone Ash/ Manilla Road-ish foundational elements as far as the mysterious guitar passages and quiet to mid-range vocal parts. There’s so much to take in song to song – listeners one moment can key in on the flamenco-acoustic/rhythmic handclap accents, the pumping bass against the Manowar/Bathory-esque axe heroics the next, or the healthy dose of twin harmonies throughout. The main vocals from guitarist Verneri Benjamin Pouttu have that odd touch – not of a normal metal world, the ancient, mystical charm should appeal to those familiar with Pagan Altar or Manilla Road, able to match the doom-like “Stars” with morose moodiness while evoking outer universe madness during “Hunger of the Depth”. The throwback production values and tones keep Chalice in that proto-metal to classic brigade – even through the layering of acoustic spirits next to the electric normality, you often think you are transporting yourself four to five decades previous when these songs run through your brain.

Cult-like probably in terms of vast understanding and appreciation, Trembling Crown is one of those albums that gains more appreciation through successive playbacks – especially when you listen deeply and intentionally. With half the songs reaching over seven-minutes (“Stars” the longest at 9:15), Chalice leaves everything on the table in hopes of attaining an epic following, so it may be best to get in on the ground running with this quartet.