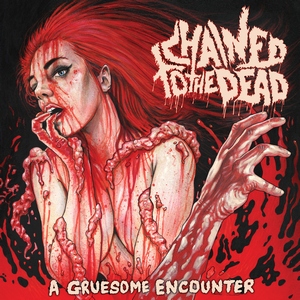 Is it possible to get that good ole nostalgia vibe without having to pander to the lowest common denominator? If Chained to the Dead’s A Gruesome Encounter is the example at hand, the answer is a resounding yes. For the band’s first full-length (following a few smaller releases, including a 2017 split), they’ve managed to capture much of the ‘90s death metal fervor without feeling like a knockoff of their inspirations.

Chained to the Dead do a lot of things right on their debut. They lean into that ‘90s era of more brutal death metal, but in a way that is varied from their peers (aka it’s not a Cannibal Corpse, Immolation, Suffocation worshipping affair). There’s little bits and pieces of some more grinding inspiration sprinkled in as well (a la Blood Duster) to provide a fast-moving but never ‘blurring’ experience. Coupled with their frequent use of some darkly humorous samples at the beginning of a number of tracks, this is what gives their feel of nostalgia. But it doesn’t stop there, as they thankfully avoid using a production that sounds like it was directly ripped from the era yet not one that’s overtly polished either. It’s just filthy enough, so to speak. With many of the tracks not hitting the 3-minute mark, they also manage to keep it pretty memorable as well. There’s moments of blasting speed, areas of thick grooves, and even a little bit of that death ‘n’ roll flavor to give the songs a slightly different spin on each other while keeping brutality at a maximum. As for a few favorites, “You’re No Saint” works in that later-day Carcass feel for rockish grooves within an extreme sound, “The Shunting” carries a great build-up into an explosive second-half, and “Beheaded by Berryman” is an effectively skull-crushing opener.

A righteously enjoyable bout of old-school flavored death metal that also manages to find its own footing, A Gruesome Encounter reeks of destructive fun over the course of its 45-minute runtime. It scratches an itch for brutality while pulling of some impressive melodic subtlety as it blasts and grooves towards oblivion.