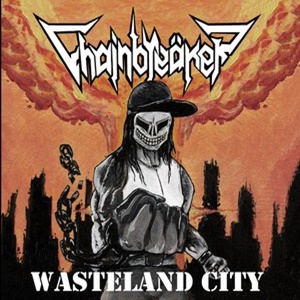 An umlaut carries street cred in heavy music – ever since the days when Motörhead made it legendary. Austria’s Chainbreäker beyond that cool factor also traverse speedy yet melodic thrash lines throughout this latest effort Wasteland City. Together since 2015, they previously issued an EP Awakening of Evil the following year, setting the stage for this ten-track outing. Subscribing to a loud, raw, and machine gun-like approach in terms of the jackhammer riffing, gang background vocals, and acidic-oriented raspy main singing delivery, there’s also that edge of catchy, melodic enhancement to keep these songs ping ponging between European and Bay Area influences.

Christoph Ley as one of two guitarists doubles up on vocals, and his maniacal approach contains a lot of early Paul Baloff meets Julz Ramos of Hatchet to his phrasing, extended screams, and natural throat bleed during standouts like “Oldschool Attitude” and opener “Merciless Eyes”. The crossover aspect to their sound comes through on some of the half-time transitions and uppity riffing where there is a call and response nature to the vocals – “F*ck S*it Up” the obvious go to cut in this regard for some serious New York style smash parts, although the dual lead break harmonies give this more musical muscle. It’s safe to say in terms of their attack, output, and general attitude regarding the genre – the quartet subscribe to an old-school outlook as they want to be speedy, occasionally breaking things up during transitions, but otherwise full-force assault is their main modus operandi. Everything from S.O.D. and early Anthrax to Exodus, Destruction, and the like factor into killer cuts such as “Awakening of Evil” plus “Rain of Ruin” as the hordes bang thy heads and circle in swarms when Chainbreäker air these songs from the stage.

Clichés abound from stage names like Chriz Speedfire to Prof. Insanity, as well as a cover of a skull-adorned, baseball cap wearing dude breaking the chains – but overall Wasteland City will win most of the thrash audience over because of it’s focused, take no prisoners attack and occasional nod to intricate musicianship passages to climb above the ‘been there, done that’ rafters.