Cesspool of Corruption – Eradication of the Subservient (Gore House Productions) 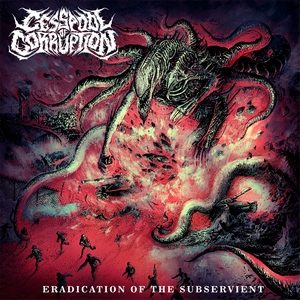 Clearing out the end of the year stuff means wading through a pile of death metal releases for this scribe. There’s always a lot, but it also means that one can be more picky about what to cover. With so many tech releases coming through the inbox, it’s nice to see a swath of releases that keep the venom and aggression at the forefront. With a scorching 5-song release, Eradication of the Subservient does exactly that for Cesspool of Corruption.

Hitting up that same feeling of classic death metal vibes from acts like Cannibal Corpse and Morbid Angel, Cesspool of Corruption is rather vicious. But rather than just keep to the same ole, same ole, they bring some tech flourishes to the table without them bogging down the works (including some impressive bass work at times). This is most obvious on the lengthy album closer, where the 9-minute runtime lets them get more playful than on the surrounding 3-4 minute rippers. But they manage to pack in as many memorable riffs at the same time as they do toss in some progressive elements on the closer, more in a Monstrosity-like manner than an Obscura one for a reference point. They also capture a variety of speeds while keeping it aggressive, such as the more mid-paced opening to “Emergence of Truth,” proving that brutality doesn’t have to rely on pure speed alone.

Considering the EP is almost 5 years old at this point, but independently released until now, it’s a great introduction to a band that is almost sure to take off with their first full-length (coming in 2021). Solidly built death metal that successfully balances some intricate musicianship while keeping both ears on the brutality.