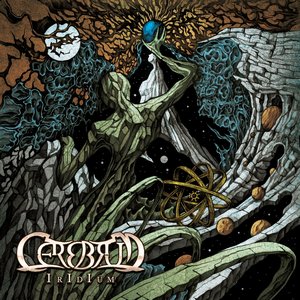 With so much tech coming out of the woodworks that simply swaps energy and passion for cold precision, it didn’t take much for Cerebrum to catch the ear. Doing some research after a blind listen, it’s clear why Cerebrum have a much more going on rather than sheer tech-madness. The band has been doing this since the early 2000s. This pedigree and reference point gives them a more nuanced approach.

Iridium has all of the impressive tech musicianship that the genre demands at this point, but it doesn’t hit you over the head with it. Instead the jackhammering riffs are intricate while keeping a more brazen edge to them. Quite bluntly, Cerebrum bring some heaviness to the table. You can hear the musicianship weaving through a track like “Absorbed in Greed,” but it always keeps the intensity around. There’s a headbanging groove that seems to be present in each track, which helps in keeping things from being too far bogged down by overtly showy displays. The bass stands out too, again almost a prerequisite nowadays but it’s done in a subtle yet impressive fashion. If there’s one spot that the band slips ever so slightly on, it’s the vocals. A strained bark from beginning to end, a little variety to match the rest would push them over the top, but as is, it simply just gets the job done.

Cerebrum isn’t going to be the winners of the ‘techiest tech’ awards, but they don’t have to be either. Iridium is solidly written with intelligent riffing patterns and structures without them getting in the way of the sometimes frantic energy. It’s a strong combination that should net the band a wider appeal as word starts to spread.